No doubt many are starting to get all geeked up over the new Star Wars movie. I know I am. But let us not follow those who like to make George Lucas into some kind of deep intellectual disciple of Joseph Campbell. Take the time to re-read this Salon article from 2002, which points out what Lucas's true influences were. George Lucas is not a thoughtful purveyor of modern mythopoeia; no. George Lucas is a fanboy. His world is indebted to the comics, especially the creations of Jack Kirby.

I remember the first time I saw Star Wars, in 1977, with friends at Mann's Chinese Theater in Hollywood. When Darth Vader first came on the screen, I blurted out, "Hey! It's Doctor Doom!" And so it was: 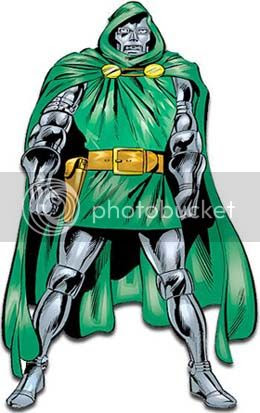 And this is to say nothing of the debt he owes to Darkseid:

For those who are not comics cognoscenti, Doctor Doom is the long-time nemesis of the Fantastic Four, while Darkseid is the villain of the later series "New Gods."

UPDATE (5/2): Thanks to all of you for your comments. And don't miss this post at Thought-Dreams. By the way, I note that in the Star-Wars Hebrew poster that Eliyahu displays, the movie is described as a maaravon — a "Western"!

While I have no doubt that the costumes and characters may take a lead from comics, watch The Hidden Fortress, directed by Akira Kurosawa, and you'll see where Lucas lifted the story for Episodes IV-VI, where the concept for the set of Dagobah originates, and who inspired his Artoo-D2 and C3PO.

Thanks for your comments, gents. Ken, I think you're probably right, and there are Kurosawa elements in episodes I-II as well.

Kurosawa was a big influence. Cast and Crew have also stated that the Wizard of Oz was a huge influence. I worked out some of the parallels for a post on another forum once:


As our story begins, the hero(ine) lives with his/her aunt and uncle in a treeless, waterless plain, without parents, clearly the (symbolic-Dorothy/real-Luke) child of the Universe/God (in Luke's case, Darth Vader is a Dark Father and truly is a godlike being). The old woman comes to steal Toto (R2D2) away, while R2D2 (Toto) is purchased (reversal) from the Jawas. That very night, Luke/Dorothy runs away, Dorothy to protect R2D2 (Toto), Luke to save R2D2 (Toto) (reversal). While they are away, the twister/Empire strikes. The hero(ine)'s surrogate parents undergo (symbolic in storm cellar) death. The hero(ine) is transported to a new world/reality, where s/he meets little people (jawas/munchkins) and the Good Witch/Obi Wan. The hero(ine) discovers that s/he has great power (Ruby slippers/Force) but learns has a great enemy (Witch/Vader). Dorothy travels the yellow brick road, meeting the Scarecrow and picking up the Lion and the Tin Man on the way. Star Wars changes this sequence, Luke starts out with the Tin Man (C3PO), and meets the Lion (Chewbacca) and the Scarecrow (Han -- no brains) on the way. Yellow Brick Road = Hyperspace. Together they go to the Emerald City/Alderan where their problems will be solved. There they learn that Alderan has been destroyed. This echoes later event in Oz when they find out the Wizard is fake.

Luke arrives at the Death Star/Witch's Castle, and the story flips back on itself. Leia is now Dorothy and Luke (no brains -- Han even says "He's the brains of this outfit"), Chewbacca (no guts -- Han describes him as a "sissy" Leia as "walking carpet -- something you can walk all over) and Han (no heart -- Leia later describes Han as "You're all heart") become the Scarecrow, the Lion, and the Tin Man, respectively. The object is to rescue Dorothy/Leia from the Witch's Castle (Death Star). Dorothy's presence in the castle is announced by R2D2 -- "He keeps saying "She's Here!" She's Here!" -- (Toto always equals R2D2, whose role never changes), just as Toto escapes to take the Lion, Scarecrow and Tin Man to Dorothy in The Wizard of Oz. Broad Hint: everyone in the movie can understand what Toto/R2D2 are saying, but the audience can't. The Death Star is destroyed/Witch's Castle emptied of evil, and everyone gets a medal. Of course, at the end, the Rebel Planet is composed entirely of trees (reversal).

The Empire Strikes Back is also The Wizard of Oz, but in a way that is immensely more mythically powerful. There Leia is profoundly opposed to and linked to Dorothy through oppositions -- Dorothy's innocence opposed by Leia's authority, for example, but they are linked by parentlessness and virginity, Dorothy's being due to the artlessness of pre-adolescence, Leia because she is the Virgin High Priestess of the Rebel Cause (the Princess). But the basic underlying story is again the same. Again the movie opens in a treeless waterless desert, the ice planet Hoth. Again as the movie opens, someone has run away (Luke in the R2D2/Toto role temporarily) and must be found. As they are found, a storm (the Empire) comes and drives them from their home. Luke proceeds to a planet that is nothing but trees and water (reversal) where again he meets a good witch, and must face an evil one (Vader, in dream). Meanwhile, Dorothy (Leia), Han (Scarecrow), C3PO (Tin Man) and Chewbacca (Lion) all proceed to Cloud City (Oz) which fulfills dual role of Munchkinland (workers are short, remember?). There, the three men and woman meet an Vader (male witch -- reversal) who has powers but is evil, reversing the Wizard of Oz, who is fake but good, but echoing Wicked Witch of the West, who also has real powers but is evil, thus uniting Cloud City and Witch's Castle and Oz in one place. Meanwhile Luke (Toto) shows up to rescue 3 men and Woman (reversal of Toto's role, which is to spark rescue rather than effect it). Han is frozen and exchanged for evil twin Lando (who is black!), and Dorothy, Lion, Tin Man, and Scarecrow escape from Cloud City (Oz) instead of finding what they wanted there, leaving Toto (Luke) to battle the Witch/Wizard (reversal). Then Dorothy, Lion, Tin Man, and Scarecrow (Leia, C3PO, Chewie and Lando) return to Oz to rescue Toto (Luke),instead of being rescued by him (reversal). Toto (Luke) is defeated by the Witch (Vader) (reversal).

I just finished watching Kurosawa's The Hidden Fortress (as well as the interview with Lucas on the DVD), and while he certainly was inspired by elements of the story, I don't think the influence is as much as people tend to make (and Lucas didn't make a big deal out of it as well). At least I didn't see it. And I have recently re-watched all of the Star Wars episodes with my kids as preparation for the release of episode III (I am trying not to get my hopes up too much; the first two episodes were quite the disappointments. I still can't get over Anakin's come on line to Padme: "I don't like sand. It's coarse and rough and irritating and it gets everywhere. Not like here. Here everything is soft and smooth -- like you..." Gag!)

I'm glad to see the Darkseid reference. He also featured in some of the "Legion of Superheroes" best comics.

Dorothy travels the yellow brick road, meeting the Scarecrow and picking up the Lion and the Tin Man on the way. Star Warschanges this sequence, Luke starts out with the Tin Man (C3PO), and meets the Lion (Chewbacca) and the Scarecrow (Han -- no brains) on the way. Yellow Brick Road = Hyperspace. Together they go to the Emerald City/Alderan where their problems will be solved. There they learn that Alderan has been destroyed. This echoes later event in Oz when they find out the Wizard is fake.