The Lost Finale: We Got Wormhole

Among the many factors that made the season finale of Lost so fascinating was the mention on the Orchid orientation video of "a pocket of negatively charged exotic matter." As every schoolboy knows, NCEM is the crucial ingredient needed to stabilize a wormhole and make it traversable. And traversing a wormhole can enable time travel as well as space travel.

So that's one mystery solved; the Island uses wormhole technology for its jaunts around the space-time continuum. Although I'm really hoping that Ben's stunt with the donkey wheel didn't put the whole Island in the desert (or on another planet).

More Terrific Scholarship From Me

I see (HT: Awilum.com) that an article of mine from a while back, "4Q246," is available in several formats from the Institute for Biblical Research website. If you're really interested, you can also read John Collins' article attacking my conclusions. Both were originally published in the Bulletin for Biblical Research.

4Q246 is the fragment that mentions the "son of God." One of these days I plan to rebut JC's refutation (or refute his rebuttal). I'll post the information here when I do.

I'm pleased to announce the forthcoming publication of A Glossary of Targum Onkelos. Enjoy. It's amazing what you can get done if you don't blog. 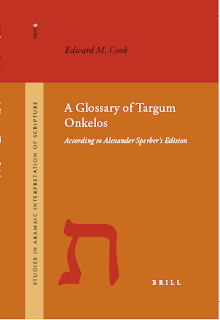 Thanks to readers' suggestions, I have a book list for the next several months. I just finished reading Eifelheim, by Michael Flynn, and it's a good one. The plot basically is "Aliens land in 14th century Germany," although that doesn't begin to convey the depth of the book. I don't know anything about the author, but he appears to be well-informed about both contemporary physics and medieval philosophy and theology. I imagine this is a rare combination. Depth of religious feeling is unusual in sci-fi and Eifelheim compares well in this respect with the gold standard of Walter Miller's Canticle for Leibowitz.

I'm not sure what's next on the list; depends on when I can get to the library next. In the meantime, I'm reading whatever I can find in the house. I re-read Alan Garner's Elidor, which was fine, but too short. Right now I'm in the middle of Horace Walpole's Castle of Otranto. Most of what I know about HW is based on Macaulay, who basically considered Walpole a boob. The Castle, unfortunately, will not change that opinion. Stylistically and narratively, it is a mess, and finds readers today only by virtue of being the first gothic novel.

It's interesting that "taproot texts" like this are often so unreadable to moderns. I also find Mary Shelley's Frankenstein pretty lame, and only of historical interest. On the other hand, Bram Stoker's Dracula is still a good read today and fully the equal (or superior) of Stephen King and his ilk.