I very much enjoyed the Easter message of Pope Benedict. I like this pope, and I like his gentle insistence on the link between faith and reason as the way forward, not only for Christianity, but for the world.

Resurrexi et adhuc tecum sum – I have risen, I am still with you, for ever. These words, taken from an ancient version of Psalm 138 (v. 18b), were sung at the beginning of today’s Mass. In them, at the rising of the Easter sun, the Church recognizes the voice of Jesus himself who, on rising from death, turns to the Father filled with gladness and love, and exclaims: My Father, here I am! I have risen, I am still with you, and so I shall be for ever; your Spirit never abandoned me. In this way we can also come to a new understanding of other passages from the psalm: “If I climb the heavens, you are there; if I descend into the underworld, you are there … Even darkness is not dark for you, and the night is as clear as day; for you, darkness is like light” (Ps 138:8,12).

This is as sensitive a modern exposition of the Christological sensus plenior as you could ask for; and I am increasingly convinced that this kind of exegesis is (and should) be making a comeback within the church.

But, being who I am, I am most interested in the textual question. The sentence resurrexi et adhuc tecum sum corresponds to ‏הקיצתי ועודי עמך in the Masoretic text, "I awoke and still I am with you." Resurrexi, "I rose again" is an interesting interpretation of the Hebrew "I awoke." In this case it is probably mediated via the Septuagint translation ἐξηγέρθην, which could be taken either as "I woke up" or "I rose up." In fact, even the Hebrew word (derived from the root ‏קיץ) could plausibly be connected with awaking from the sleep of death, as in Isa. 26:19, Jer. 51:39, Job 14:12, and Dan. 12:2. So resurrexi is not necessarily a far-fetched translation.

But whose translation is it? The text of the Easter Introit in the Mass at St. Peter's is derived from one of the oldest of the Latin translations of the Psalter, the Psalterium Romanum, which is St. Jerome's first revision of the Old Latin translation. In this case, resurrexi is probably left over from the Old Latin, and not from Jerome's revision. A later revision of Jerome's, the Psalterium Gallicanum, reads exsurrexi, which is more unambiguously "I rose/stood up" without the overtones of resurrection. His last version of the Psalter, rendered directly from the Hebrew (iuxta Hebraeos), reads evigilavi, "I woke up."

But many of today's translations read completely differently. For instance, the JPS translates, "I end — but am still with You." The NRSV has "I come to the end—I am still with you." In fact, the "Neo-Vulgate," sanctioned by the Vatican reads si ad finem pervenerim, adhuc sum tecum. This stems from a hypothesis that הקיצתי should be derived from a root ‏קצץ, "to come to an end" (see BHS and HALOT).

I must admit I don't agree with or even understand this hypothesis. For one thing, the proposed root is otherwise unattested in verbal form. Plus, none of the ancient versions understand the verb in this way. The whole context is as follows (from the NRSV):

I try to count them—they are more than the sand;
I come to the end—I am still with you.

"Them" refers to "God's thoughts," which v. 18a says are "more than the sand," i.e. literally innumerable. The modern emendation actually suggests that the psalmist can number God's thoughts, and come to the end of them. But surely this is against the whole tenor of the passage (and the psalm as a whole)?

The psalm as a whole is based on the idea of God's limitlessness. He is everywhere, and his thoughts exceed human comprehension. This couplet in that context has to mean this: (a) God's thoughts surpass human limitations; they cannot be counted; (b) God's presence is not conditioned by human weakness; the psalmist sleeps and then awakes, but God's presence does not waver and wane in the same way. "When I wake up, I am still with thee." Thus even the literal sense is not altogether foreign from Benedict's homiletical interpretation.

-- I was sorry to see that Paul Scofield died the other day. He portrayed, unforgettably, St. Thomas More in the 1966 film A Man For All Seasons, one of my favorite movies. More's indomitability in the face of persecution is still inspiring. One of the last of his public remarks didn't make it into the movie, and it shows the Christian temper of the man even at the last extremity. Just after he was condemned to death, he said to his judges:

"More have I not to say (my Lords) but like as the blessed Apostle St. Paul, as we read in the Acts of the Apostles, was present, and consented to the death of St. Stephen, and kept their clothes that stoned him to death, and yet be they now both twain holy saints in heaven, and shall continue there friends for ever, so I verily trust and shall therefore right heartily pray, that though your Lordships have now in earth been judges to my condemnation, we may yet hereafter in heaven merrily all meet together to our everlasting salvation."

-- Another of my favorite writers, as readers of the blog know, was C. S. Lewis. I'm always on the lookout for interesting books about Lewis, and Alan Jacobs's biography The Narnian (2005) caught my eye a few days ago. Unfortunately, I can't recommend it. There are no new facts or insights in the book, and in truth Jacobs does not seem to have any great appreciation for Lewis. I was a little taken aback when Jacobs referred to Lewis's friend Charles Williams (another favorite of mine) as "creepy," and I decided to stop reading altogether when Jacobs called Perelandra "unreadable." Don't waste your time on this book.

-- I have many reasons this Easter season to be thankful (some of which I will post in due course). I wish for all my readers the manifold blessings of the season. Happy Easter!

So. Lost is still awesome, although Doc Jensen thinks last night's episode was "subpar." I disagree, for a number of reasons.

The Opening. This completely subverts our expectations for an opening. So far this season, we've had only flashforwards (not counting Desmond's Dr. Demento time travel experience). So when Juliet walks in, talks about feeling like a "celebrity" to her "therapist," I'm thinking, "So Juliet is one of the Oceanic 6, wow." But then, Mr. Friendly pops his head in. "So Mr. Friendly is not dead? What th--? No, it's a flashback! You magnificent bastards!"

Michael Emerson. Although this episode seemed to be all about Juliet, it's really all about Ben. How did he get word to Harper Stanhope? (Speaking of whom — is she alive or dead? She vanished awfully quickly after Jack showed up.) Just what exactly are Ben's powers? Plus, I loved Emerson's range in this. He played his "date" with Juliet (We're havin' ham!) so perfectly, as the smitten, geeked-up nervous nerd he essentially is. And then reverted to the bug-eyed control freak.

VALIS. As it happens, I just finished reading Phillip Dick's VALIS last week, and I was delighted to see a close-up of Ben re-reading it. The show is saying, "Here's a hint, folks." There are two aspects to VALIS that might be germane to Lost (spoiler alert). One is that the main character, Horselover Fat, seems to be separate from the narrator (Phillip Dick), but the big reveal is that they are one and the same. The other aspect is that Fat occasionally shares consciousness with (or merges selves with) someone from the past, a 1st century Gnostic named Thomas. I think the latter is the most relevant, given the temporal consciousness-switching we saw in the previous episode. Or, just the acronym VALIS might be important: Vast Active Living Intelligence System, which is the book's name for God. (BTW, I don't really recommend VALIS; as a story, it is kind of inert, and religio-philosophically, it's just incoherent.)

The Whispers. They're back, and I'm glad. How long will it be before some geek decodes them, plays them backwards, and figures something out?

And, OK, still: Who is Ben's man on the boat? I've already hypothesized it is Sayid. Would that cause Ben to tell Locke, "You'd better sit down"? It might. Most people are guessing it's Michael. Would that be equally as shocking?

On the other hand, I share Doc Jensen's feelings about the episode-ending kiss. This couple, Jack and Juliet, has absolutely zero chemistry. None. I don't know if that's a function of the actors, Matthew Fox and Elizabeth Mitchell, having no chemistry (possible) or if somehow Juliet is messing with Jack's mind, Ben-fashion (also possible). But I just don't believe this couple.

Tomorrow there will be a primary election in Ohio. You might have heard something about it.

Since I never overtly discuss politics on this blog, I am going to use code names, or allegorical images, for the candidates. There are two main candidates on the Democratic side.

The other candidate is Krusty: 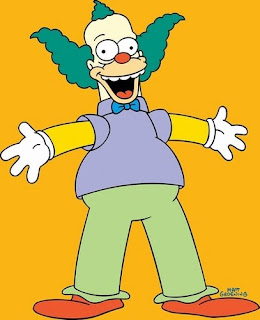 For the first time in history, Amy and I are voting for the same person. We are both voting for Krusty. We feel that Gabbo does not have enough experience.