The story is told of James Joyce, who, when an ardent fan begged to "kiss the hand that wrote Ulysses," said, "No. It did lots of other things, too."

The same is true of 2005, or of any other year. Any attempt to summarize or assess one solar revolution in terms of its most tragic (or joyful) headlines will miss, even from an earthly point of view, much that will later be seen to be of key importance, and overemphasize much that will be soon forgotten. And from the heavenly point of view, the only true history is that which traces how the world, and each individual soul in it, moves towards, or away from, the Beatific Vision. There is only one reliable Narrator of that history, and His work remains unpublished.

For myself, 2005 was a year that fell well short of my personal hopes and expectations; but for most of my loved ones, it was splendid. This is a bargain I would willingly make year after year.

Merry Christmas to All 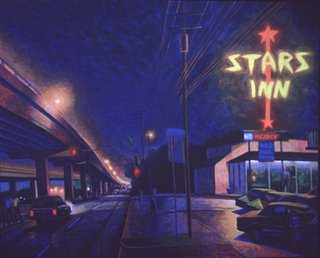 Welcome, all wonders in one night!
Eternity shut in a span,
Summer in winter, day in night,
Heaven in earth, and God in man.
Great Little One! Whose all-embracing birth
Lifts earth to heaven, stoops heaven to earth.
—Richard Crashaw, On the Nativity
A very merry Christmas to all readers of "Ralph."

(The image above is a painting by James Janknegt; go here and pick up a print of one of his wonderful pieces.)
Posted by EMC at 10:11 AM 3 comments:

It's time for the 2nd Annual Ralphies. (Last year's Ralphies can be found here.) Feel free to join in.

Best NONFICTION BOOK I read this year: Fergus Millar, The Roman Near East, 31 B.C.—A.D. 337 (Harvard, 1993). Anyone who is interested in the New Testament, the Dead Sea Scrolls, early Christianity, early Judaism, or the sociolinguistics of late antiquity should read and absorb this book.

Best FICTION BOOK of the year: This is probably the only book I read that was actually published in 2005, but it deserves the award anyway: Harry Potter and the Half-Blood Prince. My first impression can be read here.

Best MOVIE of the year: The Lion, the Witch, and the Wardrobe. I'm hardly objective, since I'm a big C. S. Lewis fan. But I can say this: Not only was I not disappointed, I was deeply moved.

Best CD of the year: (I'm still learning not to say "album" or "record.") Illinois, by Sufjan Stevens. Nothing else released in 2005 comes close to this extraordinary collection. Still, Chavez Ravine by Ry Cooder is worth mentioning, as is Faded Seaside Glamour by the Delays. (You don't need links, do you? Can't you find these yourselves? OK, here.)

Song of the year: "Nearer than Heaven," by the Delays. Sublime, glorious pop music. Find a sample on this page. (Update: listen to the whole thing streaming here under "Audio.")

UPDATE (12/19): Thanks for the comments below. Further lists have been created by Rick Brannan (see Rick, I got your name right this time) and Joe Cathey, as well as Chris Riley in the comments. (To check out Chris's excellent art and photography, see his blog.) As for Jim Davila's suggested category: I'm not sure I read a book in my field that was published in 2005, although many looked very interesting. In fact, I hope to read Jim's book before much more time elapses.

UPDATE (12/31): More Ralphies from Danny Zacharias, Jim Davila, and MattDanTodd. Also, in case you thought my taste in music was idiosyncratic or perverse, check out the Best CD choice of 2005 from Pitchfork, the online arbiter of all things cool and nondweeby.

UPDATE (1/2): Last but definitely not least: Tyler Williams weighs in, complete with cool 3-D rendering of a "Ralphie" award. Awesome.
Posted by EMC at 2:19 PM 7 comments:

The Targums on Accordance

Readers of "Ralph" may be interested in my survey of the Targums and the Targum modules that I worked on for Accordance. Accordance is the best (IMHO) Bible software program available today, no matter what they say in Bellingham, WA.
Posted by EMC at 8:34 PM 7 comments:

A Lost Scrap of Tobit from the Schoyen Collection

Here is a transcription of the text followed by a translation:

There's not a whole lot new here. The Schoyen fragment overlaps with 4Q198 frg. 1, and has a slightly different reading at line 2: די ממלל, where 4Q198 has די מלל. The Greek translations of Tobit are closer to 4Q198, translating "that Nahum (or Jonah) spoke" instead of "is speaking." Line 3 also suggests the reading ממללין "(they) speak" instead of the text J. Fitzmyer (in DJD) reconstructed for 4Q198 מללו "(they) spoke."

The Schoyen site notes that the Tobit text is "rather different from the Septuagint and shorter." This is a little misleading. There are in fact two Greek versions of Tobit, one of them the "standard" Septuagint text, and another significantly longer version, preserved in Codex Sinaiticus and a few other witnesses. As a rule, the Aramaic and Hebrew versions of Tobit found at Qumran show more affinity (although not exclusively) with the Long Recension.

Tobit 14:3-4 in the Long Recension (NRSV): When he was about to die, he called his son Tobias and the seven sons of Tobias and gave this command: “My son, take your children and hurry off to Media, for I believe the word of God that Nahum spoke about Nineveh, that all these things will take place and overtake Assyria and Nineveh. Indeed, everything that was spoken by the prophets of Israel, whom God sent, will occur. None of all their words will fail, but all will come true at their appointed times. So it will be safer in Media than in Assyria and Babylon. For I know and believe that whatever God has said will be fulfilled and will come true; not a single word of the prophecies will fail. All of our kindred, inhabitants of the land of Israel, will be scattered and taken as captives from the good land; and the whole land of Israel will be desolate ...

In this particular fragment, once again the affinity is with the Long Recension, but the Qumran text here must have been somewhat shorter than the Semitic Vorlage of the Long Recension (VLR). We know that the lines of 4Q196 average about 50 characters/spaces per line, but a reconstruction of the VLR that includes all that is in the Greek will not yield the right line lengths. (A PDF of my reconstruction of the VLR for this verse is available by request via email; the old link has rotted.)

Maybe the most interesting thing about this text is its provenance. According to the site, the text was sold by Kando in 1972 to an "American priest, later serving in Switzerland," who had it until 1995, when it was presumably sold to Martin Schoyen. Kind of makes you wonder what else is out there, doesn't it?

Paul the Punster Compared to Harold Bloom and Diogenes

In the New York Times recently, a reviewer of Harold Bloom's latest book remembers the Yale professor's hostility to Christianity:

I never thought I would hear a professor publicly proclaim - at Yale, no less - the great, private Jewish gripe that in layman's terms might be expressed: Christianity stole our watch and has spent 2,000 years telling us what time it is. Bloom punningly referred to the New Testament in Hebrew as "Brit haHalasha" ("weak covenant"), instead of "Brit haHadasha" ("new covenant").

Bloom's pun — not a terribly good one — falls into a long line of reciprocal Jewish-Christian insults, although Christians, as the majority religion, have no doubt committed far more.

One of the oldest comes from the Apostle Paul, in the letter to the Philippians (3:2), where he says, "Beware of the katatomé." This is a play on the word peritomé, "circumcision," which, in Paul, often refers not to Judaism as such, but to the Jewish-Christian party that insisted on circumcision as necessary to Christianity. Katatomé comes from katatemno, "to cut into pieces, gash, slice up." This pun is perhaps more hostile than Bloom's, but they are both working out of the same tradition.

I'm always interested in seeing how wordplay is translated. In this case, a good translation would make it plain that circumcise, circumcision is being punned upon. The results over the years have been mixed. The Peshitta translated as pesaq besra, "the cutting of the flesh," which may have the additional overtone of "castration." The Vulgate has videte concisionem, which makes it into the King James as "Beware the concision." Unfortunately no one knows any more what "concision" means.

By the way, the BAGD lexicon (s.v. katatomé) cites as a parallel to Paul a saying of Diogenes preserved in Diogenes Laertius : "He called the scholé (school) of Euklides cholé (gall) and the diatribé (lectures) of Plato katatribé (waste of time)." In my opinion, the old Cynic, as a punster, had it all over the apostle and the professor.
Posted by EMC at 9:21 AM 1 comment: