Henry Timrod made some news a couple of weeks ago by getting some of his lines quoted, or re-used, by Bob Dylan in his new album Modern Times. Timrod was a Confederate poet whose works are now in the public domain. Apparently Bob consciously or unconsciously snipped a few florid Victorian phrases and dropped them into some of the old-timey songs on his record. I don't think there's anything really wrong with that; it's not like he took whole passages and used them wholesale.

And yet Dylan, in his memoir Chronicles, comes pretty close to doing exactly that with other authors. Look carefully at this short passage:

Walking back to the main house, I caught a glimpse of the sea through the leafy boughs of the pines. I wasn't near it, but could feel the power beneath its colors. (Chronicles, p. 162)

Compare that to this longer passage from Marcel Proust's Within a Budding Grove, especially the passages in italics:

But when, Mme. de Ville-parisis’s carriage having reached high ground, I caught a glimpse of the sea through the leafy boughs of trees, then no doubt at such a distance those temporal details which had set the sea, as it were, apart from nature and history disappeared ... But on the other hand I was no longer near enough to the sea which seemed to me not a living thing now, but fixed; I no longer felt any power beneath its colours, spread like those of a picture among the leaves, through which it appeared as inconsistent as the sky and only of an intenser blue.

I don't think there can be any doubt that Bob had to have consciously taken these sentences and, with some revision, passed them off as his own.

Another example is from a book that I imagine Dylan knows well, Huckleberry Finn:

Every night we passed towns, some of them away up on black hillsides, nothing but just a shiny bed of lights; not a house could you see. ... There warn't a sound there; everybody was asleep.

One night when everyone was asleep and I was sitting at the kitchen table, nothing on the hillside but a shiny bed of lights ...

My last exhibit (a less exact quote) comes from a book called Really the Blues (1946) by Mezz Mezzrow and Bernard Wolfe, in which a hipster introduces "his chick" to Mezzrow:

Baby this that powerful man with that good grass that'll make you tip through the highways and byways like a Maltese kitten. Mezz, this is my new dinner and she's a solid viper.

And now, part of Dylan's description of his friend Ray's girl, Chloe Kiel:

She was cool as pie, hip from head to toe, a Maltese kitten, a solid viper — always hit the nail on the head. I don't know how much weed she smoked, but a lot. (Chronicles, p. 102)

And later in Really the Blues, a black man was "sitting there actually talking to a white woman cool as pie."

Now what are we to think of these "borrowings"? I know that borrowing and revising tunes and song lyrics is standard practice in folk and blues music, and Dylan has done plenty of that, quite openly, as have others. That doesn't bother me. But in a sustained piece of prose that is not meant to be sung or played, but taken as the author's own composition, it is not standard practice. In the instances given above, I think Bob comes pretty close to real plagiarism, and for all I know there are more instances in Chronicles yet to be identified. Frankly, as a Dylan fan from way back, I'm a little disappointed. Say it ain't so, Bob.

Jack London, Children of the Frost:

"Rum meeting place, though," he added, casting an embracing glance over the primordial landscape ...

Chronicles, p. 167: I cast an embracing glance over the primordial landscape ...

Jack London, Tales of the Klondyke:

Another tremendous section of the glacier rumbled earthward. The wind whipped in at the open doorway ...

Chronicles, p. 217: Wind whipped in the open doorway and another kicking storm was rumbling earthward.

Sax Rohmer, Dope (1919), A tiny spaniel lay beside the fire, his beady black eyes following the nervous movements of the master of the house.

Chronicles, p. 167: A tiny spaniel lay at the guy's feet, the dog's beady black eyes following the nervous movements of his master.

London, Children of the Frost: And then they are amazingly simple. No complexity about them, no thousand and one subtle ramifications to every single emotion they experience. They love, fear, hate, are angered, or made happy, in common, ordinary, and unmistakable terms.

Chronicles, p. 169: Yet to me, it's amazingly simple, no complications, everything pans out. As long as the things you see don't go by in a blur of light and shade, you're okay. Love, fear, hate, happiness all in unmistakable terms, a thousand and one subtle ramifications.

UPDATE III (Oct. 2): Jack London, Tales of the Klondyke: Through this the afternoon sun broke feebly, throwing a vague radiance to earth, and unreal shadows.

Chronicles, p. 112: The afternoon sun was breaking, throwing a vague radiance to the earth.

Jack London, White Fang: He carried himself with pride, as though, forsooth, he had achieved a deed praiseworthy and meritorious.

Chronicles, p. 63: He didn't need to say much—you knew he had been through a lot, achieved some great deed, praiseworthy and meritorious, yet unspoken about it.

R. L. Stevenson, Providence and the Guitar: As Leon looked at her, in her low-bodied maroon dress, with her arms bare to the shoulder, and a red flower set provocatively in her corset, he repeated to himself for the many hundredth time that she was one of the loveliest creatures in the world of women.

Chronicles, p. 127: I bought a red flower for my wife, one of the loveliest creatures in the world of women. 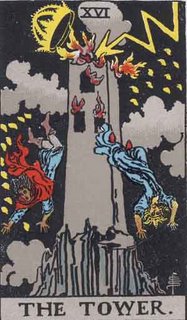 And Jesus answering said unto him, Seest thou these great buildings? there shall not be left one stone upon another, that shall not be thrown down.
-Mark 13:2

Well, God is in heaven
And we all want what's his
But power and greed and corruptible seed
Seem to be all that there is.
—Bob Dylan, "Blind Willie McTell"

Defenseless under the night
Our world in stupor lies;
Yet, dotted everywhere,
Ironic points of light
Flash out wherever the Just
Exchange their messages:
May I, composed like them
Of Eros and of dust,
Beleaguered by the same
Negation and despair,
Show an affirming flame.
—W. H. Auden, "September 1, 1939"
Posted by EMC at 1:14 PM 5 comments:

Not all the words and music here are Dylan's. . . . But Dylan surrounds these borrowings with his own brilliant and uncanny poetry: "I'm walking with a toothache in my heel" ...

What are they teaching kids these days?
Posted by EMC at 1:54 PM 3 comments: