OK, is this thing on? Hello? OK. Yes. I'd like to read a press release from the Association of Hollywood Moguls.

Hello, American people! We know you're out there, because, dang it, somebody keeps buying movie tickets. But actually, lately, that number's going down. And frankly, folks, that brings us to our main topic of this press release, the decline in ticket sales. We've actually come to a realization: most of the movies we make just suck. When we checked the summer schedule of movies coming out — frankly, even we got a little nauseous. We've got sequels to comic-book movies coming out, like Superman; we've got remakes and more remakes (yes, the rumors are true, we remade "The Poseidon Adventure"); we've got lame teen comedies full of fart jokes, and, um, even more sequels. Oh, and horror movies that are remakes of Japanese originals. For us, a high concept movie is "Snakes on a Plane."

The fact is, folks, we're just plain out of ideas for good movies. And we think you deserve better. So we've decided that until we've gathered enough ideas for a whole season's worth of good cinema, we're just not going to make any more movies.

I know what you're thinking, especially if you're a theater owner. But don't worry: we're going to re-release a lot classic movies, without remaking them, so that there will be plenty of films at your local cineplex. We just think that you haven't lived until you've seen "Casablanca" or "The Seven Samurai" on the big screen. Enjoy!

"What about us?" the actors have been saying. Don't worry, you crazy kids! We've lined up plenty of work for you. Most of you will be recording a ton of audiobooks, just to keep your voices in shape; the rest will be honing their actorly skills in "little theater" productions all over the country. We can't wait to see it! And, speaking of actorly skills, we also want to be the first to announce that several stars will be going back to Remedial Acting School! Yes! The first two scholarship recipients? Keanu Reeves and Ben Affleck.

How long will it take? We're not sure, but we think after about 5 years we may be able to start making a few interesting, intelligent, and exciting movies. We appreciate your patience until then, and we look forward to seeing you at next week's world premiere of "Citizen Kane." Thanks!

When Was the Gospel of Mark Written?

Since today is the feast day of St. Mark the Evangelist, I hearby announce, in his honor, that almost every scholarly discussion of the date of Mark's Gospel is wrong. I would like to state — with only a soupçon of exaggeration — that Mark was written within one year after the resurrection.

This statement cannot be proved wrong without assuming (a) that the Gospel makes widespread use of vaticinium ex eventu, that is, history disguised as prophecy; and (b) that the evangelist relied on a chain of oral tradition, whose crystallization requires "a long time". I submit that both of these assumptions are arbitrary. Assumption (a) imports a philosophical premise (prophecy cannot happen) into a literary argument; and assumption (b) assumes, usually without argument, that Christian tradition was immediately oral and only secondarily written (instead of, as is more probable, a mixture of both).

Obviously I am taking an extreme position to make a point. But can anyone point to indications within the Gospel that point to a date ca. 65 CE or later (the usual date given) without relying on the above assumptions?
Posted by EMC at 1:51 PM 13 comments:

I note that Jim West has announced the "dis-integration" of the biblioblogging community. He may well be correct, or not; I don't know. I do want to put in my two cents about my own decreased activity in the blogosphere, which Jim cites in two places, including the remark that I (among others) have been "strangely silent."

As I noted a while back,* I started a new, non-academic, job in November that keeps me busy 40 hours a week. When I'm not "at" work, I continue to do other work at home, fulfilling commitments to Oaktree Software and others, and trying to honor various writing contracts. I also have family and church activities that I would not like to neglect. There's just not much time for writing blog posts or even reading them.

If, as Jim asserts, the other "classic" bibliobloggers are blogging and communicating less, this may be a function of the expansion of Biblioblogdom. When I started blogging in November 2004, there were approximately 4.5 million blogs (according to Technorati); now there are 35.8 million. This exponential growth has been felt among biblioblogs as well. The community that started out small has grown too large to keep up with even in a passive read-only way, to say nothing of engaging in daily back-and-forth debates.

So ... life happens. It's okay. Let a thousand flowers bloom.

* I said in November 2005: "This meeting [SBL] caught me in the middle of a career reinvention, as I begin to renounce the threefold academic vow (poverty, bibliography, and jargon) and transition from full-time independent scholar to full-time cubicle dweller with philology as a hobby. This will also affect "Ralph"; as the demands on my time increase, blogging will become harder to fit in. But I won't quit. Watch this space."
Posted by EMC at 11:05 AM 3 comments:

Gnosticism and the Jews

Misunderstandings and misapprehensions about the Gospel of Judas continue to flow. Secularist commentator Christopher Hitchens, who is apparently completely devoid of elementary knowledge of church history, remarks that acceptance of the Gospel of Judas would help to combat Christian anti-Semitism:

The Judas gospel would make one huge difference if it was accepted. It would dispel the centuries of anti-Semitic paranoia that were among the chief accompaniments of the Easter celebration until approximately 30 years after 1945, when the Vatican finally acquitted the Jews of the charge of Christ-killing.

Christianity, of course, has much to repent of in its treatment of the Jews over the centuries. Nevertheless, when the Church rejected Gnosticism, it was taking a step away from anti-Semitism, not towards it, because the Gnostics despised the Jews, the Jewish God, and Jewish Scripture. As Hyam Maccoby writes,

While anti-Semitism (in the sense of intense dislike of Jews) was not uncommon in the ancient world, it was probably among the Gnostic sects that the most radical form of anti-Semitism originated — the view that the Jews are the representatives of cosmic evil, the people of the Devil. (The Mythmaker: Paul and the Invention of Christianity, p. 186)

Maccoby continues by portraying St. Paul — most unreasonably, in my opinion — as himself an early Gnostic. However, Maccoby's principal thesis is correct.

Gnosticism's intense rejection of Judaism seems to have been overlooked in the modern revisionist rush to anoint the Gnostics as a "healthy corrective" to orthodox Christianity. If the Gnostic version of Christianity had prevailed, Judaism might not have survived.
Posted by EMC at 1:29 PM 5 comments: 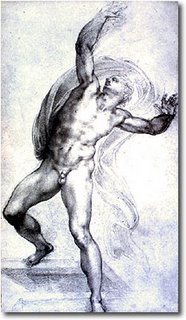 Michelangelo's chalk study "The Risen Christ."
Posted by EMC at 12:26 PM No comments:

More on the Gospel of Judas

The ole Internet is just a-simmerin' these days with more Gospel of Judas stuff. Several blogs are rounding up links for one-stop-shopping for GJ news; I think I'll just mention Doc Cathey's post, and you can go from there.

One essay you should not miss is Adam Gopnik's contribution to the New Yorker, an excellent piece from a secular perspective. The New Yorker — darn their blue-state hides! — still has the best writing around, and Gopnik is always worth a read. His conclusion:

Whether one agrees with Jefferson that this man [Jesus] lived, taught, and died, or with St. Paul that he lived and died and was born again, it is hard not to prefer him to the Jesus of the new Gospel, with his stage laughter and significant winks and coded messages. Making Judas more human makes Jesus oddly less so, less a man with a divine and horrible burden than one more know-it-all with a nimbus. As metaphor or truth, we’re sticking with the old story. Give us that old-time religion—but, to borrow a phrase from St. Augustine, maybe not quite yet.

Is the Gospel of Judas "Troubling"?

All right. Here we go *sigh* with another Gnostic Gospel alert. Now the publication today of the Gospel of Judas is providing tons of grist for the junk-scholarship mill. Here's what the NYT has to say about this and other Gnostic Gospels:

As the findings [of Gnostic gospels] have trickled down to churches and universities, they have produced a new generation of Christians who now regard the Bible not as the literal word of God, but as a product of historical and political forces that determined which texts should be included in the canon, and which edited out.

For that reason, the discoveries have proved deeply troubling for many believers. The Gospel of Judas portrays Judas Iscariot not as a betrayer of Jesus, but as his most favored disciple and willing collaborator.

The utter inability of the NYT to understand the import of this discovery is just amazing. Although elsewhere in the article, the authors seem to grasp that this "gospel" is a product of the second or third century AD/CE, they push the idea that somehow it provides information about the first century AD/CE and the historical Jesus.

And then the idea that some gospels were "edited out" of the canon — ! I run into this idea all the time among the uneducated, but to find the American newspaper of record buying into it is just annoying. Do they get all their information from Dan Brown?

I suppose it bears repeating: (1) none of the Gnostic gospels, which date from at least a century after the time of Christ, have any credible claim to provide evidence about the historical Jesus; (2) none of the early New Testament canons ever included any gnostic Gospels, therefore those Gospels could not have been "edited out"; (2) any theological perspective held by grown-ups on the formation of the canon should be able to accommodate both the governing hand of God and the presence of "historical and political forces."

Unfortunately, this post will probably linger on in cyberspace as a real discovery and eventually make its way into a Wikipedia article. Caveat lector.
Posted by EMC at 8:41 AM No comments: